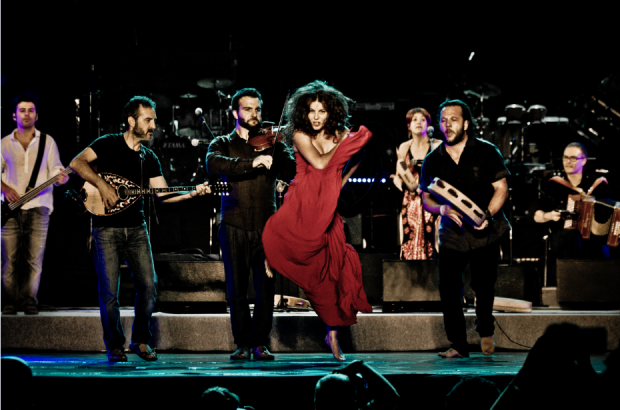 The whirling rhythms and gale force irascibility of Canzoniere Grecanico Salentino are something to behold. Violins shriek and swoon, an accordion groans, a bass guitar throbs and thuds dissonantly. Sometimes vocals will intrude, rising like a wind over the tumult of instrumentation.

The Italian band are part of a Continent-wide folk revival which seeks to look past tourist clichés and present ancient sounds in a modern context. However, a deep knowledge of the compositional traditions of rustic Europe is not a prerequisite to enjoying their music. They are fast, they are relentless  – and, for the newcomer, that is enough. No expertise is necessary – merely an ability to appreciate a cracking tune conveyed at breakneck pelt.

That said, their brand of Italian folk has a deep history: the Salento region in the country’s ‘boot heel’ stands at a crossroads between the Eastern Adriatic and Africa, and, as the fancy takes, Canzoniere Grecanico Salentino are able to inhabit both worlds. One moment there’s a dervish intensity that reminds you of the aching Saharan pulsations of Tinariwen, elsewhere the pre-modern cacophony puts the listener in mind of the neo-medieval experimentation of Dead Can Dance. It’s gorgeous – yet deeply eerie when it wants to be.

Given Dublin’s large Italian population, it is no surprise ex -pats should be out in strength – or that, as dancer Silvia Perone emerges, red caped and shoeless, many in the audience mirror her gestures, holding scarves about their heads in the traditional fashion as they sway back and forth (good luck squeezing past with a clutch of beers in hand).

At the risk of showcasing one’s ignorance, it might be pointed out that great swathes of European folk music can sound like Irish trad played at slightly the wrong speed. This is certainly true here: with band leader Mauro Durante’s violin taking the lead, the seven-piece plunge into the sort of whirligig fugue familiar to anyone who sat through Ceili House as a youngster..

Only when the music stops, do the cheesier elements of Canzoniere Grecanico Salentino’s identity shine. Speaking slowly Durante explains that the folk forms his ensemble extol have their roots in celebratory dance – those ancient traditions may have fallen away but the truth of their message endures. Life is short, seize the moment while you can. It’s a cornball sentiment, one that Durante and his players articulate with tremendous fervour.