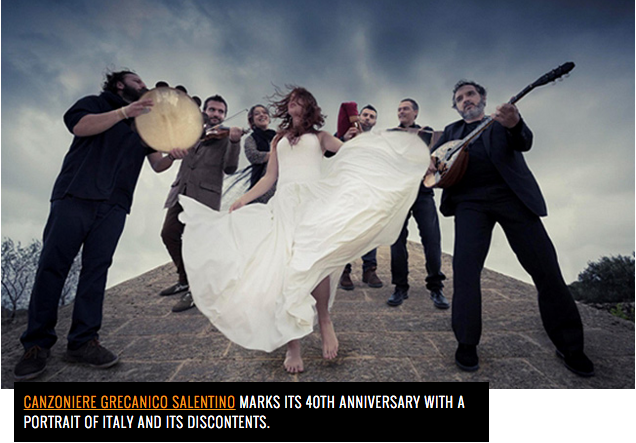 On the world music scene, there have been few success stories in recent years as gratifying – and unlikely – as Canzoniere Grecanico Salentino (aka CGS). The band, from the Salento peninsula of Italy’s southern Puglia region, has been building an international fan base with a rigorous touring schedule that has taken them far beyond their home base, through Europe, North America, and to Australia and New Zealand. Critics praise their electrifying shows and first-rate albums. A recent review in fRoots (Folk Roots) magazine captured the critical consensus: “Do they live up to all the hype they’ve received? Hell, yes! Are they one of the best bands in the world at the moment? Without a shred of doubt”.

The core of the CGS sound is the pizzica taranta, a powerfully rhythmic, trance-inducing folk style that originated centuries ago in Salento as a ritual healing music. Pizzica was played to cure the victims of tarantismo, a state of physical and emotional distress supposedly caused by the poisonous bite of a tarantula. While a small group, usually comprising violin, button accordion, and tambourines played and sang, the “bitten” danced themselves into a frenzy until they collapsed, purged of the spider’s poison. Tarantismo emerged among peasants, landless farm workers and manual laborers, with most victims of the spider’s bite being women, who lived under a stifling and sexually repressive patriarchy.

As the anthropologist Ernesto de Martino observed in his famous study, The Land of Remorse, tarantismo was a cultural response of marginalized people to a “crisis of presence”,  a disorientating sense of lacking power – what we nowadays call “agency” – to cope with stressful psychological and social conditions. The religious-magical rituals oftarantismo gave sufferers catharsis, helping them heal (if only temporarily) feelings of loss and alienation brought on by the crisis of presence.

Tarantismo died out in Salento decades ago; what has survived is its music. In Italy during the ‘70s, young, left-wing musicians led a folk music revival that rediscovered – and championed – old and often disparaged idioms. In 1975, a leftist writer, Rina Durante, and her cousin Daniele, a singer and guitarist, launched a pizzica revival when they founded Canzoniere Grecanico Salentino. (The band’s name means Salentine Greek Songbook, referring to the ancient Greek roots of Salento’s folk music.) In 2007, Daniele turned over the leadership of CGS to his son Mauro, a virtuoso violinist and percussionist. The second-generation band has released the albums Focu d’amore (2010), Pizzica Indiavolata (2013), and now Quaranta, its title a nod to the band’s forty-year existence.

Justin Adams, a guitarist in Robert Plant’s Sensational Space Shifters, has worked with CGS members and other Salentine musicians. He observes that pizzica “is not as four-square as most European folk music. It’s got something of Africa in it”. By that, Adams means the emphasis on rhythm and repetition to induce trance states. Those elements are in place on Quaranta, but there’s a difference from past recordings – some tracks are more “folk music” than pizzica taranta. “Pu e to rodo t’orio” (Where is the beautiful rose?) has lyrics in Griko (an ancient Greek once widely spoken in Salento), but the music, by bouzouki player Emanuele Licci, sounds inspired by Appalachian folk. This likely has to do with producer Ian Brennan, who twice won Grammys for Best Traditional Folk albums, and, in 2012, a Best World Music Grammy for Tassili, by the Tuareg band Tinariwen.

If Brennan’s production leads the band in some new directions, Quaranta nonetheless has all the qualities that captivate CGS fans: drama and mystery, intense emotion and soulful melancholy. But this time there’s something else: anger, even rage. Italy’s folk music traditions include protest songs, and there are some great ones on Quaranta that take on environmental destruction, poverty and unemployment, and immigration (past and present). “No TAP”, written by Daniele Durante and sung by Emanuele Licci, with horns from the Albanian brass band Fanfara Tirana, sounds comic, even carnivalesque. But there’s no mistaking the band’s displeasure over the Trans Adriatic Pipeline (TAP), a massive project to transport natural gas from Azerbaijan to Europe. In Puglia, community activists, and both local and regional government, have opposed the TAP as bad for the environment and area economies, but the national government has ignored the protests. Durante’s lyrics personify the TAP as an arrogant deity of “the religion of gas”: “Debate topics / the sick and the elderly / what you do and what you say / I don’t give a fuck / because I’m the tap”.

“Solo Andata” (One-Way Ticket), with lyrics by the Neapolitan writer Erri De Luca (currently on trial in Italy for allegedly encouraging sabotage of the TAP), deplores the plight of today’s desperate migrants to Italy, making connections to the experience of the impoverished southern Italians who emigrated during the late nineteenth-early twentieth centuries. “Ziccate” (Hold On) shifts between two viewpoints: that of a grandson of farm workers who has gotten rich dumping toxic waste in the fields his forbears worked, and an opposite one – his guilty conscience? – that acknowledges, “What the ancients left us / without any shame we ruined”.

“I Love Italia” indicts contemporary Italy by contrasting romantic images with ugly reality: “You go for a walk / beauty till you swoon / you’re dreaming of Fellini / kissing at the fountain / just behind the scene / rubbish like a mountain”. “Italy’s a treasure”, the band sings, “but all of us are broke / Mona Lisa’s smiling / but we don’t get the joke”. The chorus couldn’t be more sardonic: “Spaghetti, pizza, mandolino – O mamma mia, I love Italia!”

Quaranta paints a dark portrait of today’s Italy (even the love songs are tinged with sorrow), and of the state of its people, native and immigrant, who are experiencing their own crises of presence. But it does so in vibrant, richly colored sound. CGS boasts three terrific lead vocalists – Giancarlo Paglialunga, Maria Mazzotta, and Emanuele Licci – who weave stunning polyphonic harmonies, with Mauro Durante often joining in. (Paglialunga also is a master percussionist.) Diatonic accordionist Massimiliano Morabito and multi-instrumentalist Giulio Bianco are invaluable assets, the first an exceptional soloist and accompanist, the latter a versatile colorist. With Quaranta, Canzoniere Grecanico Salentino, a band rooted in the past but thoroughly contemporary, has made an outstanding album that feels both of the moment and timeless.